Armenia FM: List of Karabakh visitors is and will continue growing 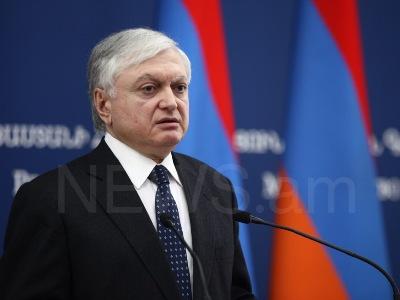 YEREVAN. - The list of foreigners visiting Nagorno-Karabakh is and will continue growing.

Foreign Minister of Armenia Edward Nalbandian said the aforementioned in the parliament on Wednesday, responding to MP Ruben Hakobyan’s question on the extradition of the Israeli-Russian blogger Alexander Lapshin from Belarus to Azerbaijan.

According to the FM, several days ago he called this deal shameful, stating that it would harm its participants not only in terms of their reputation. “This touched a raw nerve in Armenia and other countries, as well as international human rights organizations. Of course, the substantiation of Lapshin’s extradition didn’t mention his visit to Nagorno-Karabakh. But Azerbaijan’s “black list” already includes hundreds of distinguished figures, even government officials and foreign ministers.

The number of visitors hasn’t dropped, while their list is and will continue to grow. Perhaps Azerbaijan is trying to lure other countries into these schemes. But one shouldn’t respond to provocations and play into Baku’s hands. By this kind of conduct Azerbaijan is only moving towards self-isolation. Aliyev’s visit to Brussels and the statements made there come to prove this,” Nalbandian noted.